Smashed Revolver: The Non-Violence Microphone is a microphone sculpted by Anna Sundblom-Westerlund, then cast in bronze. The project is an artistic collaboration with the Egyptian musician Ramy Essam, born in 1987 in Mansoura. During the Arab Spring of 2011, Ramy became known as the soundtrack of the revolution when he got hundreds of thousands of people to sing in his freedom songs on Tahrir Square in Cairo.

Rock artist and human rights defender Ramy Essam is considered to be one of the loudest voices of today. His resilient journey from the hub of the Egyptian revolution to the international stages has included viral hits and awards as well as moments of struggle. With his background in being the voice of the streets of his country, Ramy today stands for social justice and human rights worldwide. But fame came with a heavy price. In 2011, Ramy experienced brutal torture and arrests. Since late 2013 his songs were banned, and he was forbidden from performing publicly.
Ramy has lived in exile in Sweden and Finland since 2014.
The microphone, as a non-violent work of art and utensils in the form of a deformed revolver, symbolizes how people crack down on violence from authorities. A symbol where art, music and the word are the most powerful weapon of peace, and where the artist thereby destroys other weapons. The project is carried out on the demilitarized Åland – Islands of Peace. Through Smashed Revolver: The-Non Violence Microphone, Ramy meets the bullets of violence with his song, on stage and in music videos. (The artwork is available in two copies). 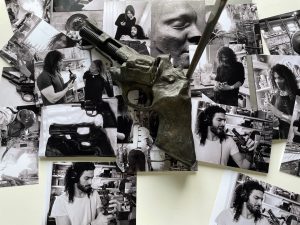 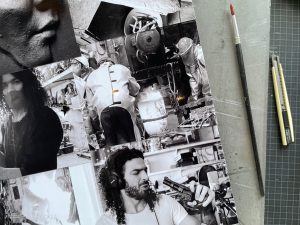